The vitriol came hot and heavy, once the initial derision and ridicule wore off, and the realization set in that Wall Street and everywhere else would continue to be Occupied. A bunch of dirty hippies parading around the streets, harassing people who are just trying to live their lives? Kids doing drugs and having sex in the park? For a certain personality type, this kind of thing just wouldn’t do.

The instinctive curl of the lip in disdain of these protesters, the spewing of horrible invective against them, is the flip side of the macho, “patriotic” cheers that ring out at the successful murder of a Public Enemy. The Two Minutes Hate has been deftly woven into the 24-hour news cycle, and the 24-minute Twitter stream. Squashing a cockroach behind the refrigerator; pulling a bloody dictator from a sewer pipe; zip-tying the limbs of a protester; all poisonous, cancerous elements to be cut out and destroyed.

Which is where tear gas and baton-wielding jackboots come into play. Military methods and technology are now police methods and technology, and those who have been in combat situations overseas – real war zones – have compared those experiences to police tactics against the Occupation. Even people who are sympathetic to the movement profess some apprehension of where this all is going, as mob situations are not most people’s idea of fun. In reality, however, ninety-nine percent of The Ninety-Nine Percent are peaceful and nonviolent, if radicalized by the desperate gravity of the times.

America’s wealth gap today is out of control, and the Great Recession has intensified the divide. Yet we have a Congress who rejects sensible stimulus spending at home, while vigorously passing NAFTA-style trade deals (with Korea and Panama) guaranteed to ship more jobs overseas and further enmesh foreign populations in the corporatocracy trap. It’s the Shock Doctrine, from Greece to Green Bay. When half the deficit comes from the Bush tax cuts and the wars, why should the difference be made up from the pockets of pensioners, or investment in our own future? Teachers laid off, the space shuttle closed down, fewer beds in our hospitals – but meanwhile, not one bankster in prison, and not one Fortune 500 company paying the official corporate tax rate. President Obama says “I think people are frustrated.” You think?

Once it was “The fierce urgency of now,” but Obama’s new rallying cry is “Stop complaining.” He is a Clintonite triangulator, a “New Democrat” of the Rubin-Rahm school whose fealty to corporate cash – and especially Wall Street cash – comes second to nothing. He and his unctuous, billion-dollar campaign must not be allowed to Occupy the Vote. We must recognize that legalized bribery is the root of these problems, and that no one beholden to Big Money can lead America towards being a truly democratic republic. 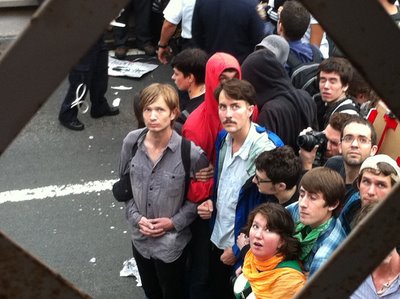 What are they even protesting?

Because of Occupy Wall Street, we have heard more about the idea of an American oligarchy. Plato taught that oligarchy comes out of timocracy – a society led by self-styled warriors, power-seekers, and embracers of the Two Minutes Hate. McCarthy was a timocrat, as was J. Edgar Hoover. Over time, the timocrat’s warped desire for political purity (which he calls “honor” or “patriotism”) is replaced with an even baser desire – for money alone. Pure greed defiles the people, and those who accumulate the most use it to gather for themselves the reins of power. The cycle enforces itself, and we have oligarchy.

The petulance of money-managers lobbying against reform to the carried-interest tax loophole is akin to that of the US withdrawing funding for UNESCO because it admitted Palestine as a member. The same arrogance drives elite American attitudes towards democracy: voting is a fine thing, until the people vote for something the elites do not like. Same with free speech and free markets: all wonderful examples of liberty, until they lead to unfavorable outcomes for centers of power.

Large multinationals no longer face any significant tax or legal burdens, and the people (through their government) exercise little control over these institutions. Where the law is weak against the moneyed interests, they seek its further weakening; where the law is strong, the government does not enforce it against them. The corporate media has abdicated its role as a check on centers of power. It has been forced to report on the Occupation, but it neglects to tell us about hunger strikes in California prisons, or longshoremen in Washington state preventing shipment of non-union grain. It does not deign to compare the treatment of environmental activist Tim DeChristopher, sentenced to two years imprisonment for “fraudulently” bidding on land meant for oil companies, to the deference shown to financial elites whose real fraud led to the economic collapse.

It is injustices like this that have brought people out into the streets at home and abroad. The end of the Occupation can only be hastened by the adoption of genuine democratic principles by the powers that be. The solution for the elites is not the application of more force (the only response they seem to have), but an embrace of accommodation, inclusion and compromise. 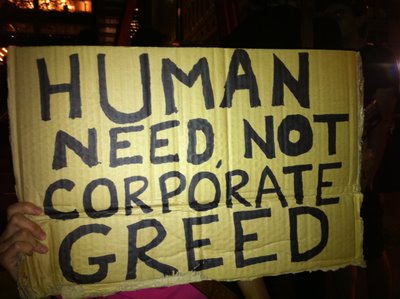